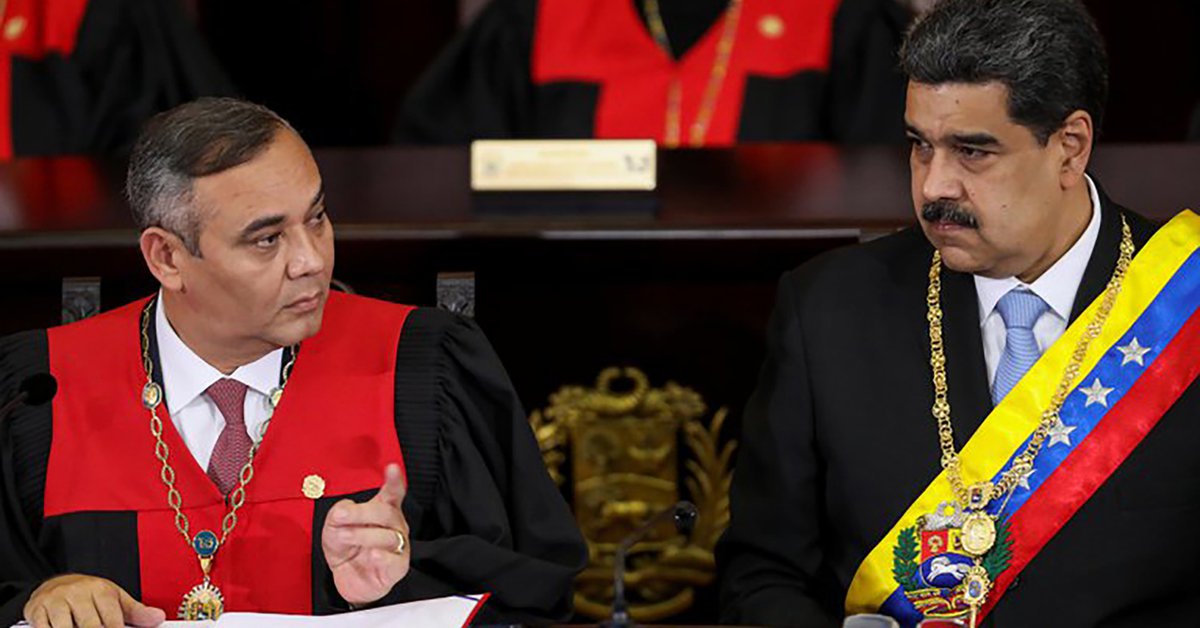 The main Venezuelan opposition parties do not go to the polls on Sundays; They are Acción Democrática (AD), the Independent Electoral Political Organization Committee (Copei), Primero Justicia and Voluntad Popular. But what do the cards of the parties appear on the electoral card of 6 December? Why The Supreme Court of Justice has appointed ad hoc boards to take control of those parties. The same happened in the case of several Chavismo parties, such as Patria Para Todos (PPT), Unidad Popular Venezolana (UPV), Tupamaros and others, whose members joined the Popular Revolutionary Alternative (APR) which carries the card of the Communist Party of Venezuela (PCV).

Using the Supreme Court of Justice (TSJ), the government of Nicolás Maduro took control of various parties from their natural leaders, Prepare the ground for the cards of the organizations to be presented in the elections that are coming today in Venezuela with the almost exclusive participation of Chavismo.

Among the parties to whom the directives intervened were the largest of the Democratic era: Democratic Action and Copy.. There are also Chavismo organizations that have decided to launch their own candidacies, including the second largest party of the Polo Patriotico (the group of organizations of the Bolivarian Revolution), such as Patria para Todos, Unidad Popular Venezolana (UPV) and Tupamaros.

The other organizations are those of those who negotiated with the government, first at the dialogue tables WTV It allowed them to show on their television programs, distribute bags of food distributed by the government, have privileges such as trips in private planes and whom Nicolás Maduro had classified as the true opposition: the Movimiento Ciudadano Cambiemos, by Timoteo Zambrano, and Prociudadan , By Leocenis García.

Let’s see the operating mode. By the Constitutional Chamber of the Supreme Court of Justice (TSJ), they use someone from the party in question to make a complaint. With a precautionary measure, regardless of the statutes and without due process or the right to defense, they appoint a board of directors to currently take the leadership and legal and political representation of the party.

The recipe is repeated: There is no right to defend, they violate the legal structure of the organization, so that they violate the statutes of the respective party. Normally, the Electoral Chamber always sent its decisions to be resolved according to the statutes of the party. But the Constitutional Chamber does not do this, but launches the precautionary measure, definitely the ad hoc directive, even with People who are not even associated with the party. That is, they use people who respond to the interests of the government in power.

What was a provisional directive is finally permanent because the judicial process is not closed.

There was no historical record of what the Supreme Court was doing with the political parties, going so far as to impose the directive of the parties. The traditional thing is that the Court orders the statutory bodies to recompose or adjust what may be corrected, but the Supreme Court never sets the hearing for the legal directives to defend itself and evacuate evidence.

The power that TSJ gives to the ad hoc boards allows them to change regional authorities and dismantle the party structure.

The Supreme Court, without considering the party’s statutes, record, history or leadership, imposed them by fingers to lead the organization, giving them political and legal representation, leaving them in debt to the government of the time, while party leaders do not Give them the right to defend themselves. The first party to suffer from this method was COPEI.

The Independent Political Electoral Organization (COPEI), founded almost 75 years ago, became, along with Democratic Action, one of the largest parties of the Democratic era, following the fall of dictator Pérez Jiménez. Its founder, Rafael Caldera, split from the organization he founded and formed Convergencia, a party with which he came to power for the second time in 1993, along with a large number of small political parties and organizations.

With the arrival of Chávez to power, Copei lost strength on the political scene. This is the first party to which TSJ imposed a directive.

In the case of Copei, a man appeared who denounced Roberto Enríquez for leading the party on the path of insurrection, later they accused him of the dismissal of several Copeyanos. The Supreme Court’s first decision was in 2015 and later, due to conflicts in the ad hoc board, they imposed three precautionary measures against the legitimate authorities.

In 2016, Copei held elections, supervised by the National Electoral Council (CNE), leaving Roberto Enríquez and Robert García elected to lead the green tent. Forty days later, the TSJ returned to convene another Ed Hawk meeting, although the election was endorsed by the governing body of the election and without any complaint.

Message from Roberto Enríquez about the elections in Venezuela

The first ad hoc board, comprised of Pedro Urrieta and the government contractor Miguel Salazar, was dedicated to changing all regional authorities, With whom Salazar has succeeded in appointing Mercedes Malawi and Carlos Alvarado as president and general secretary. They entered into internal conflict. The TSJ intervened again, and so Malavé was ousted and Salazar reappeared as president, leaving Alvarado as secretary general.

This is how the Copei card that goes to the elections, this December 6, is the one that the ad hoc board has in its hands with José Jonathan Patti, Miguel Salazar and Juan Carlos Alvarado. Behind the scenes are former governors or old leaders of the political wing.

In the case of AD, the strategy was to use the action that a man had taken against Henry Ramos Allup in previous years And put Bernabé Gutiérrez to lead the game.

For Primero Justicia (PJ), the strategy was that a group of people responded that a disciplinary measure had been taken against them and the plaintiffs had been appointed to lead the party. This is how the planters have the leadership of the party.

Two precautionary measures have been applied to PJ, one of them to nominate the ad hoc board and the other to place them in a state of legal limbo.

What happened with Voluntad Popular (VP) is identical to the Copei. The story began when on December 19, 2019, Deputy José Gregorio Noriega was expelled from the party led by Leopoldo López. The reason was that after an internal investigation they decided that the parliamentarian, representative of the Sugar State, is part of Operation Alecron, ie those who would have been the object of bribery that they should not vote for Juan Guaidó as President From the National Assembly to 2020.

Deputy Noriega, who before joining VP was a member of Un Nuevo Tiempo (UNT), went to the Supreme Court arguing that his rights had been violated. The Supreme Court ordered him to lead the party.

In a letter he published in April 2018, Noriega Figueroa resigned from VP: “With a heavy heart I am writing this letter to inform my independent resignation from the political party after almost 6 years of party militants in the orange ranks . “Since we have been discussing the debate at the Federal Activists’ Meeting (EFA) about our electoral position in the municipal elections, I have defended the need to participate in those elections with our candidates for mayor and councilors …”

Exactly the same was what happened in PJ with the deputies Luis Parra, José Brito and Conrado Pérez, who appeared involved in an investigation of Armando.info Use their status as parliamentarians in the Commissioner of the Controller to support Alex Saab and the corruption network of the CLAP. When they were expelled from Primero Justicia, they went to the Supreme Court.

Since the bowels of the Bolivarian Revolution, the most fierce organizations have been those that have come out in hand with the collectives of the 23 de Enero parish, a few steps from the Miraflores palace. Among these organizations is Tupamaro, the oldest of the groups. His maximum leader was José Pinto, an unattainable among the groups, but also moving with ease in the highest instances of power.

Tareck Al Aissami wanted to have control of Tupamaros, by someone to follow his orders, which he did not achieve with Pinto, who refused to give the match. Suddenly one day they accused him of killing a young man, he was arrested and the Supreme Court took his party, With the same modality that he applied to Copei, AD, PJ and VP.

This also happened with the second most voted party of the Polo Patriotico, the PPT, an organization led by Rafael Uzcátegui. The problem arose when the party decided not to go with the candidates of the Polo Patriotico and launch his own figures. There, the Supreme Court of Justice appeared and applied the prescription, dismissing Uzcátegui and appointing a new board of directors.

Another organization of the revolution with an imposed directive is the United United Venezuela (UPV), a party founded by the late leader Lina Ron. To this was added that other organizations such as Izquierda Unida are not allowed to register their own cards in the National Electoral Council (CNE).

A large number of Chavismo leaders, who do not support Nicolás Maduro, launched the Alternative Popular Revolutionary (April) platform, around which the leaders of the Tupamaros, PPT, UPV, IU and others have common cause. Of the parties, the only card that survived, on the electoral card, was that of the Communist Party of Venezuela (PCV), which included the leaders of all Chavista parties from whom their own cards were removed.

This is how the card for Sunday’s vote includes cards from the opposition or Chavismo, which are in fact directives imposed by the Supreme Court of Justice (TSJ) and which respond to the interests of Nicolás Maduro: AD, COPEI, PJ, VP, Tupamaro, UPV and PPT.

Who is “Nicolasito”, the son of Nicolás Maduro candidate for the National Assembly

Spain announced that it will not recognize the result of the elections called by Nicolás Maduro and will seek a common position in the EU.