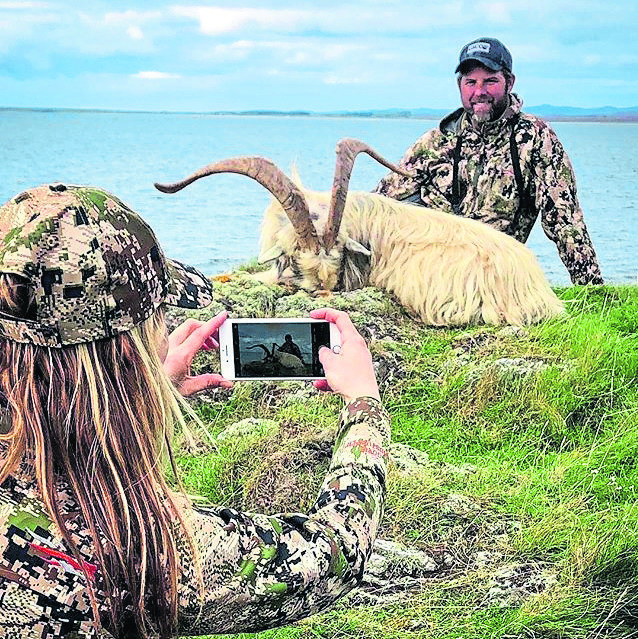 An American hunter, who has caused an uproar after publishing photographs of goats and sheep that she killed on the Scottish island, said she would never apologize for her actions and called for the end of the death threats against her.

Television leader Larysa Switlyk, 33, received a worldwide criticism when she and her companion were smiling with an animal shot at Islay Island.

She proudly described how she spent two days hunting a goat on the island before she was wounded by one with a 200-meter shot with a long shotgun.

The pictures caused accidents with politicians, celebrities, inhabitants of the island and outraged members of the public who wanted to stop the practice.

After the horrors, Switlyk said she was "posted on a bushes in the shrub for the next hunting adventure" and would not be more than two weeks.

She moved to social media again to defend her actions and thanked other hunters who supported her.

She publishes a photo of herself who has meat, she said: "Nature is my super market – fresh organic wild meat without steroids, hormones or antibiotics.

"Here comes my flesh, do you know where your meat comes from? I will never apologize for being a hunter! Hunters Unite – Praise yourself for my hunters who do not fear the voice.

"The incredible thing about social media is if you do not like my photos that you do not need to follow, or you can even block me.

"Everyone has the right to his opinion, but I must stop threatening my life and violent fantasies. It's exciting to see how much hatred is in this world, just because people have different views on things."

The petition was published on a website calling on the government to ban trophies in Scotland.

The Scottish government said it will review the animal exclusion law after the picture was answered.