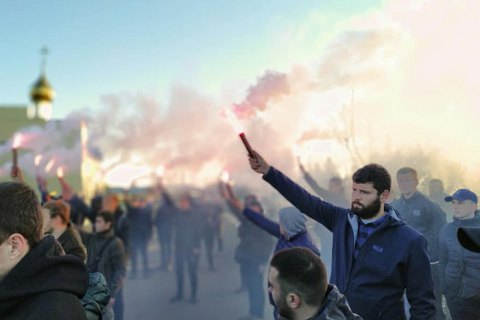 Today in Kherson he farewell with an activist, city mayor adviser, Ekaterino Gandzyuk. The funeral ceremony took place at the regional youth center and students. Due to the large number of people who farewell to Catherine, the ceremony began at 13:00, lasting until 15:00.

Gandzyuk was buried at the city cemetery, next to Alley of Heroes. The church was attended by hundreds of inhabitants of the regional center, many of whom came from other cities. During the ceremony, activists lit fires.

Recall that Catherine Gandzyuk died on November 4 in Kiev in Kiev. Active activist was activated July 31, 2018 with sulfuric acid. It received burns of 40% of skin and severe eye damage, subject to numerous procedures for removing dead tissues and skin grafts.

It is known to five individuals that it is reasonable to suspect that Gandzyuk's murder has been tried. These are Sergei Torbin, Viktor Gorbunov, Vladimir Vasyanovich, Vyacheslav Vishnevsky and Nikita Grabchuk. They are all participants in military operations in the east of Ukraine as part of voluntary formations, in particular – the Ukrainian volunteer army. Torbin and Vasyanovich awarded the order "For courage" III stage. However, killing parties are still unknown.