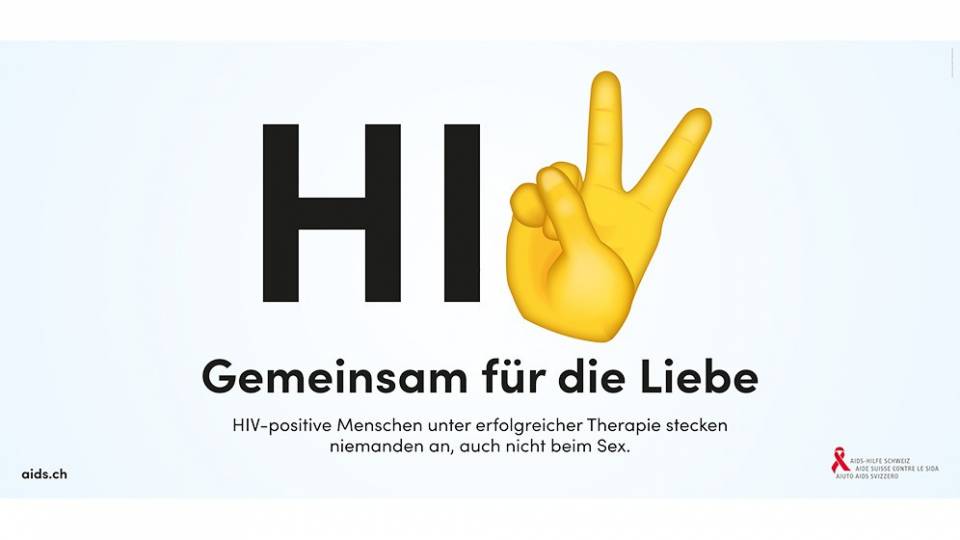 Aids-Hilfe Schweiz, in collaboration with the TFK Communications Agency, has developed a campaign to combat fear, prejudice and discrimination against HIV-positive people.

Every year on December 1, World AIDS Day. At that time, Aids-Hilfe Schweiz launched a new campaign in cooperation with the TKF Communications Agency, which was supposed to do without the threat of fingers and morals. Instead, the action involves the use of various emoji as we know it from Whatsapp, Telegram and other social networks.

"Together for Love and Desire, Together Against Fear"

The aim of the campaign is to reduce prejudice for people infected with HIV, according to Aids-Hilfe Schweiz, in a statement on his website: "HIV positive people with a reduced viral load – that is, they are taking antiretroviral therapy and regularly testing the virus can continue. "

You need to know about AIDS and HIV

December 1 is the World AIDS Day. The stated goal is to sensitize society to the risk of HIV / AIDS, to face prejudice and to show that everyone can live together. But what's really AIDS? What is the difference with HIV? And how do you get involved? Read here.

Andreas Lehner, general manager of Aids-Hilfe Schweiz, said in an interview: "Currently, HIV-positive people are too often viewed as a latent threat to others." Although it was first published in 2008 with a "Swiss statement", it was said that there is no risk of HIV infection in the treatment, many have concerns about the infected.

Lehner justifies the campaign's defensive campaign in 2018 to launch a campaign for greater sensitivity. Consequently, between 2011 and 2016, three very extensive studies were carried out on HIV-positive people who were treated and had no sexual intercourse with their partners. The results are clear: regardless of whether it was homosexual or heterosexual, there was no HIV transmission in 75,000 files.

The campaign must not reduce the issue of HIV infection, but shifting the weight of prevention: "We still have to respect the HIV virus, but where it's dangerous," Lehner says. Much greater danger comes from those who feel that HIV is negative.