Home / romania / "Marius Tuca Show": Alexandra Nechita, once "The Little Picasso": I have the fire to come back to the country that rejected my father / I think I made many enemies | Video 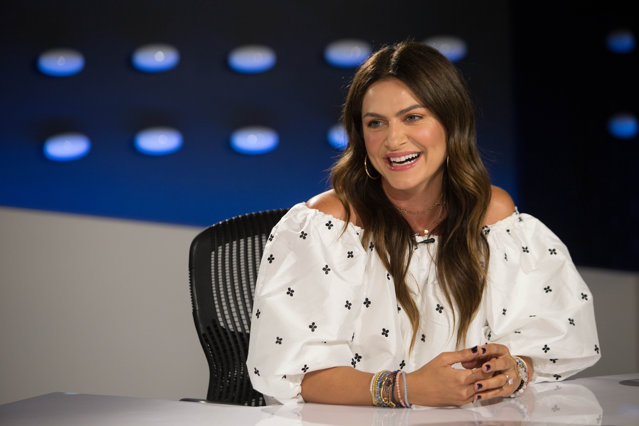 Alexandra Nechitah, formerly known as "The Little Picoto", told on Tuesday in a conversation with Marius Tuca what feelings he returned to Romania, the country of his father did everything to escape: "I fire, too. Come back to the country that rejected my father, this artist has discovered how he sees the changes in Bucharest from one visit to another in Romania: "I think I have made many enemies"

Alexandra Nechita revised the sequences with Marius Tuca in 2004 and commented on what brought him the time. After 15 years, the young artists found that she had returned only to the country for more miserable occasions, "I did not return to shame."

This time, Alexandra Nechita arrived in Romania on a holiday with her daughter and husband whom he met shortly after the show, a decade and a half ago. "I want to show Tevvy my native country. Dad was surprised. He's been struggling to leave for a long time. I think he thought everything he did, all the victims he gave me and my brother. And now he sees me coming back." "In the country," said the artist, "I have come back to the country that rejected my father," Alexander explained.

Alexandra Nechita, once the "Little Picasso": I have the fire to return to the country that rejected my father

"I think I'll go home and forget about how to park civilized," he joked about the way the car parked on the roadside in Bucharest. Alexandra Nechita visits Bucharest with her daughter and continues driving on the streets of Bucharest. "I wanted to feel the city. But I ride like a bitch. I think I've made many enemies," the artist says.

"It's not a profession, it's not a career. It's my existence," said Alexandra Nechita about her life. The artist said she had tried to keep her daughter, Tevi, from her art work, but Eventuel had to confess that painting had an important role in her homework life.

"I'm proud of myself," answered the artist, "are you brilliant?" This time, the painter did not accept too easily, "No, no, that Tevivy looks at the idea," said Alexandra.

"The sources of inspiration are changing, because I also change," Alexandra admits. "Of course I am affected by external things and circumstances and personal and social … I paint what I want to say," the artist explains.

Alexandra Nechita, once promoted as "Little Picasso": I will have a workshop in Bucharest

Alexandra Nechita, once promoted as Mikuta Picasso, revealed on Tuesday, in a conversation with Marius Tuca, one of his dreams: "One day I will have a workshop in Bucharest … one day," the artist said.

Alexandra Nechita has published several papers in her Los Angeles studio and has spoken to her as a partner in dream-sharing in the capital.

"There is a fever, no matter how complex things are for those who live here, the things I understand and don't understand, this is the thread that draws us here," the artist says.

Alexandra Nechita talked about the passion she discovered for working on glass. I started working in glass several years ago. It seemed to me a good translation of my thoughts. I liked the work of John Nemtsoi very much. We met some years ago, and now, in the next few days, I will be coming to his studio, "the artist said on holiday in Bucharest.

"Marius Tuca Show" was invited by Alexandra Nechita on Tuesday. Alexandra is known as the "Little Picasso" and is a plastic, philanthropist, painter, sculptor, and Cubist Romanian and American cubist. He was born in August 27, 1985, three months after his father, Nicki Nachita, fled from Communist Romania to the states of America.

Vyorika Nechita, wife and little Alexandra managed to join her husband or father only two years later. The patriarchs of Alexandria were persecuted under the communist regime in Romania.

The paintings by Alexandra are found in hundreds of world-class museums, from the Vatican art collection to private collections owned by celebrities such as Oprah Winfrey, Calvin Klein, Whoopi Goldberg or David Letterman. The most expensive painting by Alexandra Nechita was sold for $ 400,000 in Singapore.

Alexandra Nechita, from the "Little Picasso" to the great artist

The content of the www.mediafax.ro website is for your personal information and use only. It is Prohibited Reproduce the contents of the site without the MEDIAFAX agreement. To obtain this agreement, please contact us at sales@mediafax.ro.