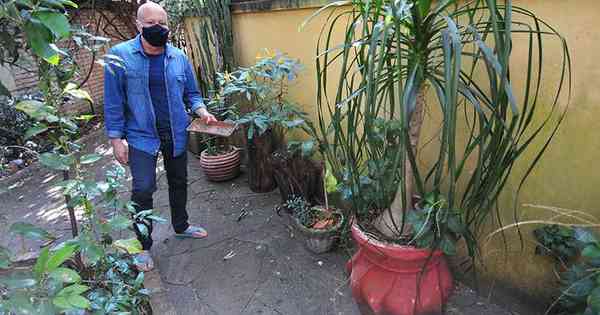 They were seen for a long time as the great villains of Deng. But the Green areas In fact, one of the main weapons against these Aedes aegypti. The conclusion of a study by the Federal University of Oro Preto (Uopop), According to which not only heat favors the proliferation of mosquitoes. Increasingly warm winters are the perfect setting for the invasion of these species into mountainous mining towns, especially in the south of the state. O Intergovernmental Panel on Climate Change (IPCC) also corroborates the increase in temperatures in the state and the tendency of the mosquito to attack higher regions.

In climate change, the vectors of arboviruses, particularly dengue, are hitchhiking. The study “Invasion of mountainous tropical cities by Aedes aegypti e Aedes albopictus It depends on constant hot winters and adequate urban bitopes “was based on the nature of the mosquito in the cities of Oro Preto and Mariana, in the central region of the state.

D Researcher Ufop, in partnership with colleagues from the State University of Montes Claros (Unimontes), From the Federal University of Minas Gerais (UFMG) And the Ezequiel Dias Foundation (Funed), Evaluated a series of winter and summer temperature data for Minas Gerais, from 1961 to 2014, to understand the pattern of average temperature changes in the region.

The study shows that “intelligence has taken researchers for a long time to combine green areas with the incidence of Tropical diseases”. According to the researcher, this view contributed to a false and devastating perception that the proximity to nature, trees, shadows and leaves would be an urban health problem.

Today, some authors have shown that various urban tropical diseases, such as dengue, zika and chikungunya, are associated with neglect of wasteland, lack of basic hygiene and accumulation of garbage. The study shows that the non-differentiation between the conditions that are determinant for diseases and the existence of green areas “often happened due to the abandonment of municipalities with cleaning and maintenance of parks, squares and gardens.

The fact is even more evident for dengue, because the transmitting mosquito, Aedes aegypti, is an exotic species, with little relevance to green areas and extremely well adapted to the interior of homes. The other species of Aedes invaders from Brazil, Aedes albopictus, better adapted to live in fragments of forests and urban parks, but was never identified in Brazil as a vector of dengue.

Scholars report that the time of invasion of the Aedes species in the 1980s was dominated by years of warm winters, just as in the early 21st century, but with great weaknesses between hotter and less hot years. Since 2007, there has been a constant period of winter with higher temperatures.

“There is an international understanding and a way to measure cities by satellite that shows the open areas and that is vegetation, that has several meanings. An example is Belo Horizonte, where there is a lot of area with elephant grass, also an invasive African “Species, typical of abandoned lands. Where there is no structure of green area, there are some problems with dengue. It is necessary to separate parks, squares and forest areas to have the correct understanding”, explained Professor Cervio Pontes Ribeiro, head of UFOP S Laboratory of Ecology of Disease and Forests (LIF), one of the responsible for the research.

The professor reports that Ouro Preto and Mariana have two areas of forest where there has been a predominance of Aedes albopictus and a decrease in Aedes agipti. “A well-preserved green area where Aedes aegypti may not be,” he says. There are two probable hypotheses: not a species of Brazilian fauna and competition. “There are two evolutionary paths for populations on continents that do not belong to them. Every exotic or invasive species is so because it encounters a disturbance. The well-structured forest can not get invaders because they can not survive – they have no nice adjustment for species that are only their food, their predators, species that will confront them. The invader adapts to these disturbances.

According to this, according to Pontes, of the Rio Doce State Park, in the eastern part of the state, which is not a lot of genres. “Other parks have Aedes albopictus. In a well-preserved area, do not enter. More or less preserved, Aedes albopictus”, he reports. In terms of competition, because South America has many species born in edes that are not vectors of dengue, The hypothesis is that Aedes aegypti may not be able to compete. “In tropical countries, the blame falls on the green areas, but when we separate each of them, a desert forest, we see that areas with trees change the profile, there is no Dengue, because Aedes aegypti could not get. ”

Another water warning. “Edes is no longer dependent on rain, due to the large amount of water that has been available,” says the professor. “The more the natural environment is preserved, the more difficult it is for any pest to enter. Disorders cause plague. If there are 10 trees in a courtyard, and it is kept clean, without garbage, with the floor that allows the roots to Breathe, it will only do you good – the combination brings birds, bats and a lot of species that eat the walking population.The more concrete it is, the more favorable it is to species that cause us diseases – whether it cockroaches, mosquitoes, rats … In this context, cities need to be reconsidered.

Urban forests, squares and parks are not villas. But global warming has however become an ally of Aedes aegypti and threatens the tranquility of regions until then less susceptible to diseases caused by the mosquito. Future vector invasions to colder mountainous regions, especially in the south of Minas, are likely in the coming years, because the consistent increase in annual temperatures, especially in winter, say UFOP researchers. “The great determinant of the climate,” says Professor Srvio Pontes Ribeiro, of the Laboratory of Ecology of Disease and Forests (page).

Scholars also warn about the need to install observatories, drop and train people to monitor the movement of animals in the areas, as a way to trigger the health surveillance alert in time. Ribeiro draws attention to the danger in the mountainous regions on the border with Sao Paulo, along the Serra da Mantiqueira. The latest epidemiological bulletin from the State Department of Health shows that of the 558 cities where no dengue cases were registered, 35.6% were in the southern and southeastern regions – a percentage that reached 42% in May.

According to the study, global warming is observed in Minas Geris, with consistent rise in temperature starting in the 1980s, peaking in the 1990s and 2000s, with an average of 1.3 ° C hotter than the 1960s. Average winter temperatures have risen further, decreasing the seasonal thermal range, with a minimum to maximum difference being less than 10% in 1990, in most years.

The literature states that there is a threshold of 21.3 ° C (for a number of consecutive days) for the invasion of Edes, Under which he is unable to establish a viable population. Since 2007, winters have been steadily warmer, being above this value for several consecutive days, which created the favorable ecological condition for mosquitoes to establish themselves, “says the study.” But there is no point in one or another cold day to avoid it. Sequence is necessary “, points points.

The Intergovernmental Panel on Climate Change (IPCC) also leaves no doubt and shows that mosquitoes tend to rise to the higher regions, as meteorologist Ruibran dos Reis emphasized from the Climate Temp Institute. Until the early 1980s, the highest temperatures in BH were below 36 ° C, with sporadic falls above this mark and maximum reaching 33 ° C.

“After the 2000s, we have had some cases with maximum daily temperatures above 36 ° C. The trend curve shows that temperatures are rising in the capital”.

“The climate of BH in the past was cold and humid. Today, hot and dry. The relative humidity of the air in recent years is between 12% and 13%. Almost direct alert state ”, highlights Ruibran dos Reis.

Another example Maria Da F, in the south of Minas, a historical cold region that was recommended minimum temperatures of 0 ° C in winter: From an average of 29 ° C maximum in 1975, increased to 33 ° C in 2015.

According to the meteorologist there are no cold waves in the capital. “It’s an occasional day of low temperatures,” he says, recalling that the capital reached 3.1 ° C on June 1, 1971.

“The problem is the variation of the climate. One hour can be very cold, and the other very hot. According to the scenario, heat waves are more frequent, according to the IPCC. ”

The mosquitoes of the genus Edes Occurs naturally in Brazilian forests, but only two invasive African species have managed to settle in cities – Aedes aegypti e Aedes albopictus. Of these, the first is surely a vector of some arboviruses. The species was introduced to Brazil in the 1970s and 1980s and is still used today.

After the initial fall of Deng in Ouro Preto, in 2007, mosquito collections began in Mariana, because it is a lower town, but also without autochthonous falls at the time. In this way, Mariana would serve as a control of the occurrence of these species of mosquitoes in the next higher city.

These collections occurred in 2009 and 2012. They were made with two types of traps: one to collect the immature phase (eggs, larvae and pupae) and another to collect the adult phase (the mosquito itself).

Being two African species with expanding populations in Brazil, Aedes aegypti (vector of dengue) and Aedes albopictus (in vector) have different preferences. They occur in areas close to housing (Aedes aegypti) Or mostly wooded (Aedes albopictus).

Despite the fact that warmer conditions allowed the dengue vector to enter in 2007, just five years later it would become a major disease in both municipalities. The delay for dengue to establish itself after the invasion of the vector insect is an information of great importance, because other regions still without dengue can use the entomological surveillance.