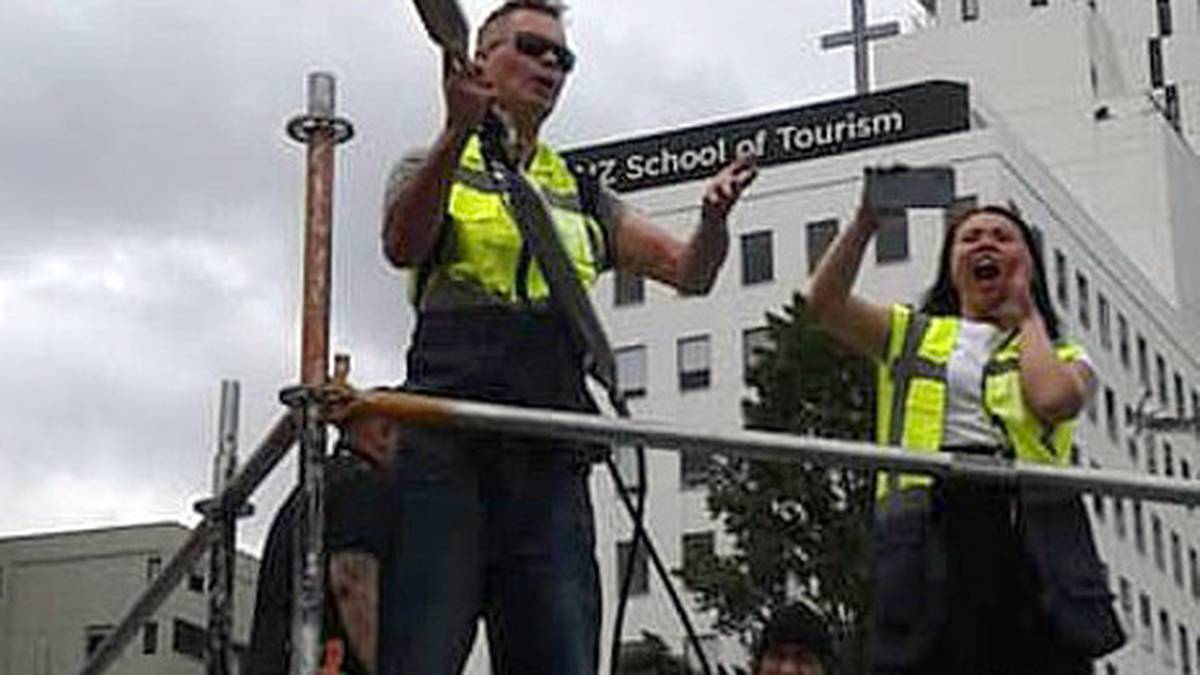 The fire chief of the Safety Warehouse yesterday defended the controversial giveaway at Aotea Square, saying it had been unfairly characterized as an “fake money” event.

Chaos erupted at the Auckland event when a crowd surged forward to capture what they thought was part of a $ 100,000 cash giveaway promotion called “The Drop”. At least 1,000 people packed Aotea Square, but few have reported getting real money and those who have received only small denominations.

Instead the participants walked away with vouchers that looked similar to $ 5 notes, which give customers discounts to products for Safety Warehouse. Many were upset, and evil crowds demanded “real money”.

Managing director Andrew Thorne said his company was distributing “real money” and his event was “unfairly labeled” as counterfeit money.

“In truth, real money was given away as anticipated. The vouchers that were also presented at the event were in addition to the money that was gone. We could never have expected the inclusion of the vouchers would have created such hostility and a
Misunderstood narrative.

“There was no intention to confiscate, mislead or embarrass any person, whether demographic or any other.

“We wanted everyone to get involved and be a part of a great event.

“This was the first of its kind in New Zealand, and unfortunately, a group ruined it for all.

“The Safety Warehouse stands at our marketing and what was released at the event.”

Despite some people saying they had to pay for tickets to the Drop, Thorn said it was a free event to say thank you to the people of New Zealand.

“The actions of a few people and various spectators are not characteristic of these
The whole mood of the event, “he said. A select few ruined everyone’s day by day, but they were not the norm – just some people who did not get as much value as they had hoped, for whatever reason. “

Meanwhile, a man from Palmerston North, who was traveling to Auckland in hoping to get money for his sick son, was overwhelmed when a stranger came with real money.

Wayne Lynch was one of more than 1,000 people who gathered yesterday in Auckland’s Aotea Square.

Lynch said he hoped on a windfall for his son after taking care of eye surgery after driving to the city yesterday with his partner.

After gathering a handful of $ 5 discount vouchers made to look like $ 5 notes, Lynch is not sure if he can even afford to return to Palmerston North.

“We were stressed about this and the whole pressure of the surgery too,” he told Nashub.

Luckily for Lynch, David Letele heard of his bad luck and stepped in with $ 1200, food and accommodation, saying “it’s not a hand out, it’s a hand up, brother”.

Lynch said he wants the organizers of what he calls a fake cash drop to be held accountable.

Pay back petition set up

Another disgusting assailant has started a petition from Change.org demanding that people with vouchers should be paid real money and planned a police complaint.

Levins’ John Murphy, said the event was a waste of time, arguing that many participants were from poor backgrounds who felt duped.

But Murphy said participants received only coupons designed to look like $ 5 notes.

“I took part in the venture and expected it to be the highlight of my short-term trip, just in case of a disaster,” Murphy said.

Absolutely disgusted with the security warehouse for throwing a $ 100k cash giveaway and then throwing fake money into the mix. People in need of the area have gathered, clearly hoping that their need will be alleviated. There was a lot of upset and the situation became unsafe pic.twitter.com/eEVbbcQGEZ

He has since initiated a petition, which has more than 280 signatories, and demanded the security warehouse envelope vouchers dispensed at the event in real money.

“I know people from outside of Oakland have been stranded. Many of us including ourselves have suffered injuries,” Murphy added.

“People pushed, shoved and threw themselves over each other in an attempt to get what looked like real money.”

He said that one who appeared to be an organizer shared a ridiculous suggestion that the 5 vouchers could be redeemed for real money in the bank.

Murphy also said he will ask police to investigate whether the vouchers can be charged with false comments.

And he said an employee was hospitalized after this as the crowd became angry and an object was thrown through the rear window of a company car smashed glass in his eyes.

A Massey University marketing professor said the company should apologize, and hire a good public relations firm to save its reputation.

But some attendees were furious.

“Wasted my petrol, time and money … I could have spent the day doing something more productive,” said a papakura woman writing on Murphy’s petition.

Another signer said the time was up, babies were hurting, we were all ashamed, and we looked like fools.

Cam Hore wrote: “What a bloody shame. Every one who attended this event should be compensated and the company should be fined for misleading people.”

Jon Duffy, Consecutive NZ chief executive, said every company that leads a promotion needs to make sure it can respect the terms of the promotion.

“If the company had not actually deposited $ 100,000 in cash at the event, they could be in breach of the provisions of the byte advertising of the Fair Trading Act.”

The law of fair trade banned anyone from advertising goods or services at a specified price if they did not intend to supply the goods.

“Bait advertising is where you advertise something that is a really good offer to get people in the door, but then do not follow through,” Daffy said.

“Once you’ve got them there, you try and upsell them to something else.”

“And we understand that people received vouchers for the counterfeit money that was distributed here, which gave them some kind of special deal,” Duffy added.

“If that’s all that was on offer, the offer could be misleading. I guess we just have to see what plays out.

“I have not seen the real money [but] It sounds like the event is not like the company hoped.

“And clearly, people did not get what they thought they were getting.”

The event is ostensibly done to thank New Zealand for their support during the Cowid-19 pandemic.

Thorn said he started the Safety Warehouse business through his company Christchurch, Greenback Capital, to supply tools, then moved into masks, hand sanitizers and other equipment when the Cowid-19 pandemic started.