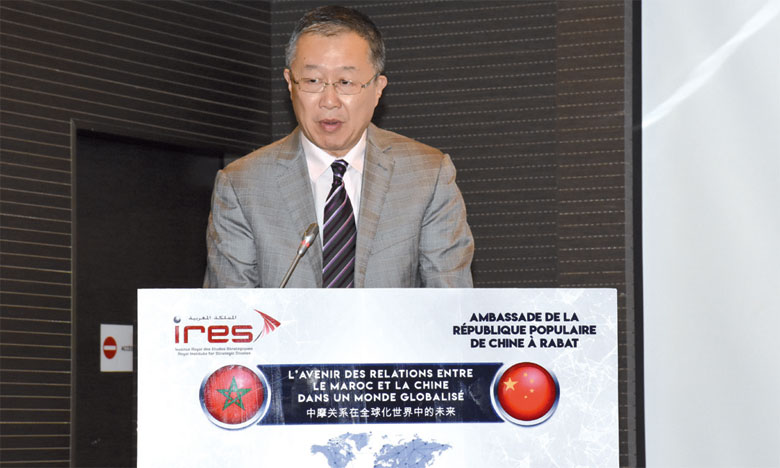 The Royal Institute for Strategic Studies, in cooperation with the Embassy of the People's Republic of China in Morocco yesterday in Rabat, organized an international conference on the "The future of relations between Morocco and China in a globalized world". This meeting, which began as part of the celebration of the 60th anniversary of the establishment of diplomatic relations between Rabat and Beijing, was an opportunity to explore the new horizons of the partnership between the two countries.

On Tuesday, the Royal Institute for Strategic Studies (IRES) and the Embassy of the People's Republic of China in Morocco marked the 60th anniversary of the establishment of diplomatic relations between Morocco and China. On this occasion they organized an international conference on the future of relations between Morocco and China in a globalized world. This meeting, which took place on Tuesday in Rabat, provided an overview of the state of the latest bilateral and multilateral cooperation and the consideration of the possibilities for their strengthening in areas and geographical areas of common interest. Relations with Africa were at the heart of this reflection.
At the conference, the Moroccans and the Chinese emphasized the importance of global relations between the two countries. "Today, cooperation between the two countries is rich, varied and fruitful. Since the establishment of diplomatic relations between the two countries in 1958, the Moroccan-Chinese friendship has been strengthened, encouraged by mutual understanding, shared commitments and the will of the partnership that has won, which extends to all areas , "said IRES Director General Mohamed Taoufiq Mouline at the opening session of the conference.

Indeed, economically, China is the third largest trading partner in Morocco, with a total trade of 42.5 billion dirhams in 2017, or approximately $ 4.7 billion, which recorded an average annual growth of + 17.1% between 2001 and 2017. Similarly, the tourism sector has a strong potential for cooperation. The abolition of entry visas for Chinese citizens in 2016 prompted trade and doubled the number of Chinese tourists visiting Morocco between 2016 and 2017, today welcomed participants who did not realize that the bilateral relations following the Royal visit to China in 2016 were strong expanded. "His Majesty King Mohamed VI signed a strategic partnership in China to strengthen bilateral cooperation in sectors with high potential for job creation, including economic, financial, industrial, cultural, tourism, energy and infrastructure sectors. In order to realize this strategic partnership, we concluded more agreements, "said Tawfik Mouline. In addition, the accession of the Kingdom at the end of 2017 to the Memorandum of Understanding on New Silk Roads, initiated by China, marked a new turning point, as well as bilateral relations, such as China-Morocco-Africa and China's trilateral relations. -Morocco to Europe. The fact is that the Kingdom of Morocco has shown its willingness to actively participate in the implementation of this global project and that it contributes a lot of resources to it, said the participants of this conference.
For the minister responsible for African cooperation, Mohcina Jazouli: "Today, views are facing China, thanks to their model and incredible economic dynamism." "We celebrate sixty years of Moroccan relations with China, but these relations are much older, that is, relations between two ancient cultures and civilizations," he added. He also stressed that Morocco has special relations with Africa and could be a strategic ally of China for its founding in Africa. China's Ambassador to Rabat Li Li said that both countries have reached new levels in their partnership. "We need to explore new ways and create benefits for the good of both regions and trade at all levels in order to establish relations on a more inclusive basis," he said.

An international conference on the future of relations between Morocco and China in a globalized world was marked by the testimonies of three personalities that illustrate the threat of Sino-Moroccan relations. The first testimony was delivered by the Executive Director of BMCE Bank Othman Benjelloun, who returned to his first business trip to China. He then spoke about the big project of Mohammed VI Tanger Tech City and the offices opened in China. He expressed confidence in the future of relations between the two countries and drew attention to the visit planned by the President of China in Morocco at the invitation of His Majesty the King. The second testimony is that the former Chinese Ambassador to Rabat Tao Cheng highlighted the singularity of relations between the two countries. He emphasized the importance of large joint projects in mutual enrichment. The third testimony was presented by another former ambassador, Shuzhong Sun. He called for the 60th anniversary of the establishment of diplomatic relations a new beginning in a context marked by profound changes in the global economy.