The Samsung Folding Phone is real and starts next year 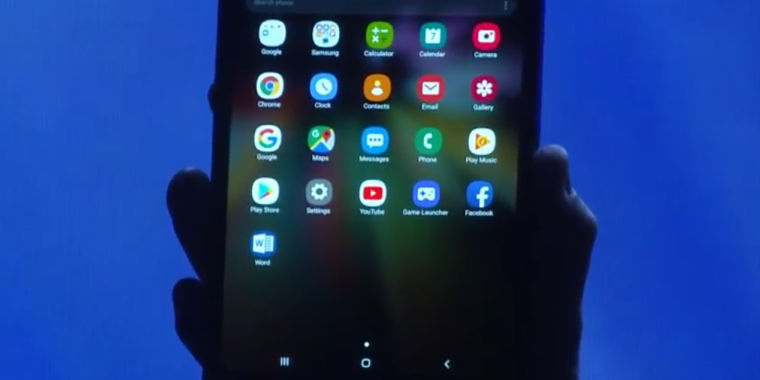 Today is the launch of the Samsung Developer Conference 2018 and the hype event, Samsung has revealed a little about the upcoming smartphone with foldable display. After many conversations about Bixby and Samsung's Android Pie update, the company cut off the lights and showed a retractable smartphone locked in the dark and hidden in the case. This was not the announcement of the entire device, but we still could collect some of the data from the Samsung auction.

Samsung calls this hardware "Infinity Flex Display", which will be part of the company's first foldable smartphone. As you expected from Samsung, the screen is still OLED. The lid is no longer glass, of course, because the glass is not flexible. Samsung says it has developed an "advanced composite polymer" -plastic to cover the screen instead. This, in addition to the new flexible adhesive that connects the display cover, allows the screen to not break until it gets damaged. The company even said it was developing "rolling" and "stretchable" displays for the future.

For this presentation, Samsung said that it "hid the elements of the model" with the example, but you could still clearly see how it was displayed and how it works, even in the dark. The phone layout seems to be much like the look of the foldable phone concept that Samsung produced until 2014. The device opens and closes as a book, and in fact there are two screens. When it's closed, a rigid, smartphone-like display appears on the front of the device. If you open a "book", another, much larger screen will appear on the inside of the device.

It is not clear how many phones were hidden by the example, but the displayed frame would represent a huge departure from the current smartphone models. When it's closed, the front screen looks very small compared to the body of the phone, with perhaps 25 percent of the upper part of the device blank. Since we can truly see only the display and frame of the body, we are not sure where to live that, for example, the camera lens.

With the new Samsung device and other a foldable smartphone recently announced (the Royole FlexPai smartphone), we see two competing models in foldable smartphones. Unlike the Samsung Royole, it uses a single screen. If we return to the metaphor in the book, Royole's design will wrap the screen around the entire front and the back of the book. When it's closed, you see the half of the screen and when it's open, the cover of the front and back sides forms a single large screen. You never look inside the book because it has no impressions and is always empty.

Samsun's two-screen display with a fold-away screen in the book seems a lot harder to pull. Sustainability is a great concern about this fold-away screen and Royole's external design looks seemingly helping with this thanks to the more gentle display when it is closed. Samsun's design of the internal screen means that a more solid nozzle is placed on the screen and thus a greater pressure.

Both of these designs are concerned about how dramatic it is to display times on the screen. FlexPai, despite the design of an external display and gentle bending, still does not come close to flexing completely flat, which further reduces the voltage on the screen. Samsung seems to be doing a lot of work in this area with the design of the internal screen, but it still does not get stiff. The framework drawings of the Samsung phone show a gap in the phone when it is closed, so it does not display the full screen.

With a device that can close in "phone mode" or opens in "tablet mode", it sounds very attractive. When the device is closed, make the device easy to store and useful for quick checking of notifications. The open tablet mode is always ready for more serious use, such as playing, reading, or viewing photos or videos. Samsung has even promised to step beyond the current implementation of multilateral Android apps and allow you to open three apps at the same time in Tablet PC mode. In addition to the usual split screen, you can redistribute the layout, with two smaller apps stacked next to one larger application.

Samsung is the world's leading screen saver, so if someone else has a flexible future, it's likely to be that. Samsung says it would be ready to "launch mass production in the coming months," while Google, who worked closely with Samsung on the device, said the launch was "next year".

Google is involved in supporting the future of a removable phone device for Android. On Google's top Android Dev, which is also happening today, the company announced a new feature in Android, called "Screen Continuity". This will allow you to run the application in one view mode, open or close the screen in the mode in the second display mode – all will only be adapted to the new screen size. Android VP engineering, Dave Burke, described a feature that says, "As you are doing, the application is continuously transferred to a larger screen without missing speed."

How well supported applications are, this app will depend on the application. Burke says that Google wants to add frozen screens support in a way that requires developers to do "as little work as possible", but they will still need to have an application built with a modern core and need to add new "obsolete" flags app.

Many Android apps today are totally horrible when it comes to resizing your screen, which you can see whenever you turn your phone. For example, look for something in Google Keep, and then rotate the phone – you will lose your search results and get a broken, empty search screen. Turning the phone often happens only delete whatever you have in the open text box. This happens in the Twitter app, which will only delete your currently entered search if the app will rotate.

Other incorrect behavior is more complicated. If you rotate on the Gmail compilation screen, it will click "enter" on any text you are currently typing, and then change the text boxes and jump to the "V" field, probably because this is the first text box on the screen. Other applications will optionally close the keyboard. This is much better than it used to be, when some applications would simply be closed and restarted on the screen, but it has Android lot the work to be done when it comes to the seamless transition between the countries of the screen.

It's unclear whether Google is building new screen continuity APIs or adding new APIs to Android to do this. Google says it will discuss the continuity of the screen tomorrow.