The Bank of Latvia launches a new gold coin, crocheted with crystals – in Latvia 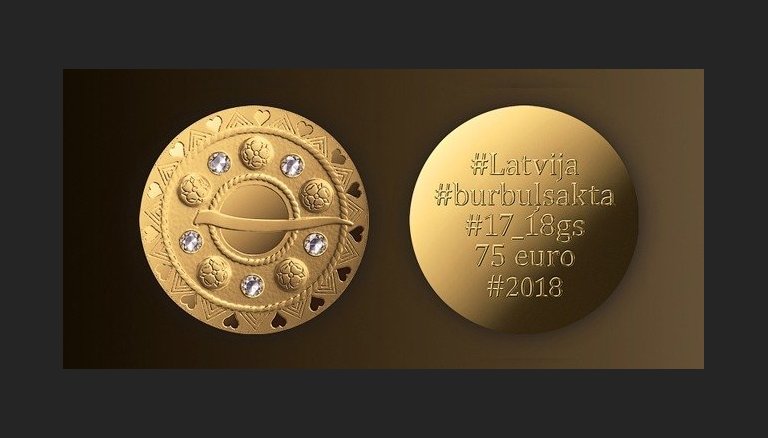 Today, the Bank of Latvia will issue coins of "gold brooches, bubbles", crocheted with crystals.

"For centuries bubble orders have been luxurious women's ornaments that were characteristic of today's territory of Latvia, which was very important for the time and became part of the Latvian national costume," said the Latvian Bank, who emphasized that the large , luxurious bubblebags made of silver and often even gilded. Bubbling orders were one of the most luxurious Latvian women's ornaments and were often cut into the name of the owner and the year of making or giving a brooch.

The Latvian bank also mentioned that bubbles were found throughout the territory of Latvia, although their decorative and clothing traditions were somewhat different, for example, in the South Kurz, such brooches were not separated one by one, but were placed on another, placed in size and finally affixed a silk ribbon. Luxurious jewelry was the pride of wealthy Latvian farmers and was often passed from generation to generation.

The largest round of the coin is 1000 copies, and on Thursday the first number – 400 copies will be sold. The coin price of the Bank of Latvia and e-mail will be EUR 560.

Ingūna Elere created the graphic design of the gold brooch "Golden Brooch" and the plastic layout – Jānis Strupulis. In the Autsriga "Munze Österreich Aktiengesellschaft", coins "Gold Brooches, Bubble Shock" have been made.

A coin with a bubble-like retouch will close a series of coins of Latvian goldsmiths. In November 2016, a collection coin with a caption of inscriptions was issued, but a coin with a pendant was issued in August 2017.

Collectible coins are a payment instrument only in the issuing State. Collectible coins are money in form but essentially works of art. They are made of gold, silver or other precious metals in extremely high quality. Unlike circular coins, coins are usually not intended for use in payments, but for gifts, souvenirs and collections. For these reasons, the price of coins significantly exceeds the nominal value. The denomination of collector coins differs from the denomination of circular coins.