Atac referendum, 330 thousand excluded from polls: where and how to vote 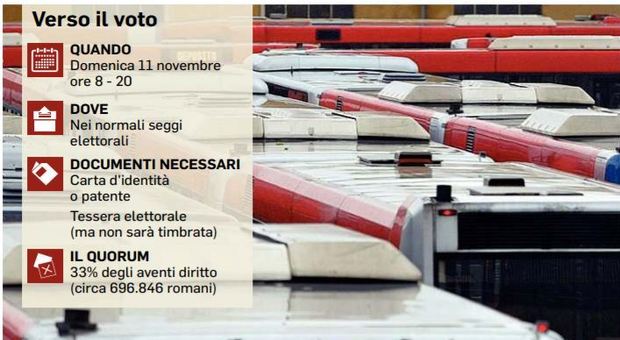 Eyes on dates. The Ordinance by which Virginia Raggi called a referendum on public transport is January 30, 2018. However, all non-Roma voters should participate, "register" between 1 October and 31 December 2017, read on the website Capitol. That's before appointment. We are not talking about the peripheral audience, but for the hundreds of thousands of people who were on the move and those who were outside the office, a short voter could be decisive (33% of the beneficiaries, and therefore just under 700,000 voters).

RULES
For all Romans, voting is scheduled on Sunday from 8 to 20 at the regular membership polls (so in all schools where you normally are looking for all elections), only the ID and the voting card. However, the latter will not be stamped. Unlike other elections, the Palazzo Senatorio Statute also allows those who do not live in the eternal city to participate in a consultative referendum, provided that these people "carry out their dominant activity in the Capitale Roma area" or perform there "Their proven activity in schools or at universities ». What makes sense is that drivers working in Rome are often moving with public transport and the same applies to many students. And yet, those who used the most unfortunate city transport, decided that they had renounced from the consultations that asked the management to allocate the services of the bus and underground stations to the best bidder, instead of always trusting only Atac, as it has been for decades, with no exceptional results.

NUMBERS
According to the Mobility and migration report from the metropolitan city of Rome, this is the former province, there are 218,615 citizens living in the hinterland of municipalities and moving to Rome every day for work. In other regions of Italy, 80,000 students attend universities in the capital, according to the documentation on "student migration flows" developed by Skuola.net portal. Cut off, they can only complain that "nobody warned us". "The public of the consultation was very flawed, even today, in many districts, information committees have not been published, as would be the case," explained promoters of the promotion Yes, who also sent the referendum warning to the Commission.

In the meantime, Campidoglio decided to validate the ATAC drivers, who asked hundreds of participants to participate in the consultation as reviewers. Although in all respects they are part of the vote and with something that needs to be lost, because if it were to disassemble Atac while taking over the new director, he would lose more awards provided by the municipal investor. Commissioner Flavia Marzano, who chairs the municipal electoral commission, explains: "I do not think there will be any changes for supervisors who are nominated by exclusion from the relative registry."

So, on Sunday, they will also be employed by ATAC to count the votes of the referendum … at Atac. The M5S also reiterated its no. At the election. For the President of the Commission for Mobility, Enrico Stefano, if buses arrive late, there is also a "responsibility for road congestion". In short, this is a traffic error. © REZERVIRANA REPRODUKCIJA