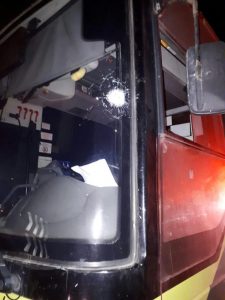 Two Israelis were slightly wounded in an attack on Wednesday night in a bus near the Focus checkpoint near Beit El in Shomron.

Units of the military unit and border police were deployed on the spot and began to search for the area for the perpetrators.

MDA doctors treated the wounded – the driver and another passenger. The driver was evacuated to a hospital, but the passenger did not want to evacuate. Both were wounded with shrapnel.