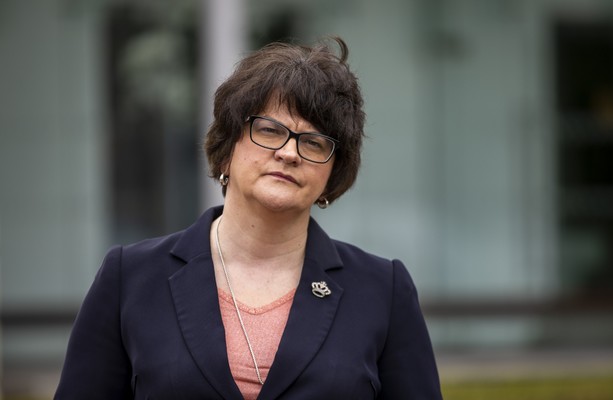 DUP LEADER ARLENE Foster has called on Taoiseach for a “fresh investigation” into allegations of clashes between Irish government authorities and the IRA in a number of murders.

In a letter from the PA news agency, Foster asked Micheál Martin for a meeting in several killings of the troubles-era, where it was found or alleged collusion between Gardai and the IRA.

The letter calls on the Irish government to “urgently assist” in what are being described as unanswered questions in the role of the state with Republican paramilitaries.

It cites the Smithwick Tribunal, which in 2013 found that Gardai leaked information to the IRA about the movements of two Royal Ulster Constabulary officers.

Chief Superintendent Harry Bren and Superintendent Bob Bukanan were murdered in 1989 when they crossed the border after a meeting at a Garda station in Dundalk.

Foster said that while the tribunal reported in December 2013, she pleaded not to take further action.

The letter also cites other IRA attacks, including the 1976 Kingsmill massacre, in which ten Protestant workers were killed.

“Despite the fact that he met with Foreign Minister Simon Cowney TD, representing the previous Irish government, nothing has come to light on the matter,” Foster wrote.

The former north minister also referred to the murders of Judge Sir Maurice Gibson and his wife in 1987, the murder of Ian Sproule in 1991, and the narrow water massacre, which was the subject of a controversial tweet by Sinn Féin TD Brian Stanley last weekend.

She thanked Tauiseach for condemning Stanley’s death, saying she had received letters from “innocent victims” about it and the publicity surrounding Britain’s decision not to conduct an immediate investigation into the assassination of Fat Pinocan.

No news is bad news
Support the Journal

Foster referred remarks by Coveni calling for a “recognition.” [for victims] On the basis of truth ”in connection with the assassination of Belfast lawyer Fat Pinucane.

“I immediately agree and I strongly believe that if your government wants to play its role in reaching out to the truth and thereby assisting in assurance, it should seek urgent assistance in the above cases and provide the necessary documentation, as well as review the recommendations.” “And the new evidence that has been revealed in the Smithwick Tribunal,” the letter reads.

There are many unanswered questions about the role of the Irish state in arming and assisting the IRA in its terror campaign during “The Troubles”, and there can be no doubt that all these issues need a new examination if we are all to achieve The truth of what happened in our shared past. ”

The letter ends with a request from Foster to discuss the issues raised with the Taoiseeach in the near future, as well as other killings where there are claims of collusion.

With reporting from Press Association.