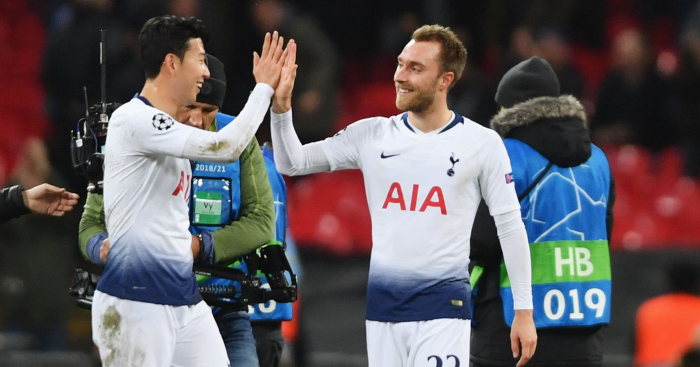 "We're playing every three days until January, and if we do not rotate, we will have some problems," warned Mauricio Pochettino ahead of a game that may have been must-win but stopped just short of must-play -best-team, sandwiched as it was between clashes with Chelsea and Arsenal. The priority was clear – games that would create Tottenham in a ultra-competitive race for Champions League places were more important than a Champions League campaign that had already endured several shades of self-destruct.

Pochettino gambled – and was clearly quite right to gamble – on Inter's belief that they only needed a 0-0 draw leading to the Italians playing conservatively, being more than happy to keep Spurs at arm's length, limiting them to long-range shots. Tottenham dominated the first half but eight of their 11 attempts were from outside the area, and Harry Winks' woodwork-rattler was the only one to contain any real venom.

It was all too small too pedestrian – too many attacks stopped just short of the penalty area with a lazy swipe at the ball rather than any dynamism or guile. But Pochettino knew he had both of these missing traits on the bench and this time, there was none of the traditional reluctance to use his substitutes. This was always the plan – to rest Son Heung-Min and Christian Eriksen but then to use them against an inter-side lulled into thinking they had control of the game and their destiny.

It was almost laughable how immediately Son and Eriksen made an impact. The South Korean had barely touched the ball before his drive into the box interrupted inter players who were happy to jockey and block. Then Eriksen's very first touch after his 69th minute introduction was to drive in a free kick that should have opened the opener for Jan Vertonghen. Their introduction turned the match into a 20-minute attack.

In the end, the goal came with an emphatic finish from the Dane, though it was Moussa Sissoko's name that was sung by a buoyant Wembley crowd. His driving run came a little closer to the box than we had seen in the opening three quarters of the game and was perfectly complemented by a deft turn and touch from Dele Alli into the path of Eriksen. It was a goal as wonderful as it was perfectly timed. Pochettino's plan was executed perfectly; Being able to rest players and still staying in the Champions League is certainly the holiest of grails.

The odds are still stacked against Tottenham going into that final game with Barcelona, ​​but that particular challenge is sandwiched between clashes with Leicester and Burnley; There will be nothing and nobody is saved for the Clarets. They will still be playing every three days, but there will be no more weeks when every game is against such a high caliber of opposition. To emerge from two games against Chelsea and Inter Milan with six points – and only push five outfield players into playing 180 minutes – is remarkable management.

Tottenham are alive. And largely well. The only question is whether Pochettino can ever afford to rest Sissoko again.