PDIP applications that we do not know, installation program "Raja Jokowi" Poster 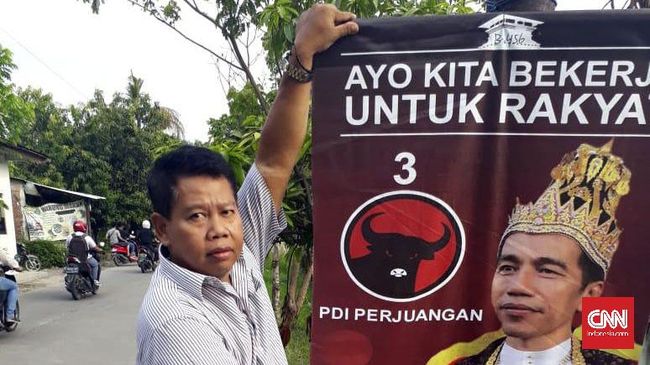 "We PDIP do not know the name yet, and we just heard his name when they claimed to be posters," said the chief Java PDIP DPD Bambang Wuryanto.

"TKN also does not know and does not know, and TKD has never touched it," added a politician known to Bambang Pacul.

The name of the WE group appeared after the poster "Raja Jokowi" in Banyumas was stored in the warehouse. One of the members of KAMI, Ada Irman Sholheh, a resident of Dukuhturi village, Bumiayu, Brebes Regency, took responsibility for the poster of Jokowi's face, dressed in the king of the Banyumas area.

At the PDIP management visit, Ada acknowledged that he was only one of the county / city level coordinators who had been invited by the central committee to a meeting in Semarang, which was said to be a 2-year support group for Jokowi. Ada himself claimed to be the supporter of Jokowi.

PDI-P still requires information from Ada and is looking for clients in the group.

"The inhabitants of Brebes are just installers, we did not find the" plan "of the posters maker. We are still investigating," Bambang said.

Prior to this, on the basis of the information gathered by his client, Bambang had about 10 Jokowi Raja posters in each village in central Java. While the number of villages in the central Javi is 8.559 villages.

"This is an analysis, a subjective analysis is not a fact, which means that there are 85,000 posters installed. When installed, it is one who receives Rs 5,000 on a poster plus a bamboo and Rp.5 rope so that the total Rp 10,000 is on a pair of" , said Bambang.

"How many times has he seen a large number, not to mention the printing, ordering and shipping costs. So this involves a lot of money, in our thinking, the money that comes is not less than Rp3.5 to Rp.4 billion. That's big money , of course, people who have this money have money, "Bambang added.