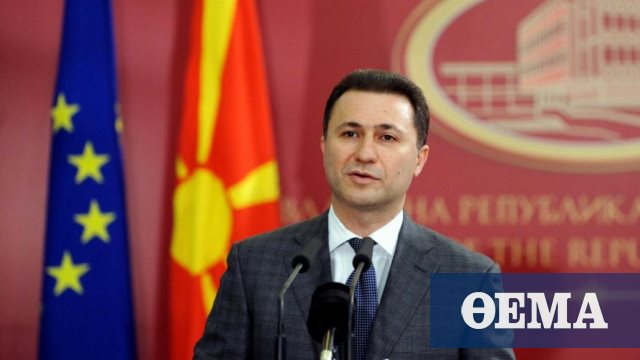 "Unspecified" for their law enforcement agencies Macedonia the former prime minister stayed until the first morning Nikola Gruevski, to the detriment of which the police in the country issued an arrest warrant for being sentenced to two years in prison.

The police forces twice went to Gruevski Dom twice in Skopje twice last night to arrest him, but he was not there.

VMRO-DPMME charged with "hunting witches" and firmly denied that he found "shelter" at the headquarters of the party, Nicholas Gruevski, and called on the police to enter clients in the case of the prosecutor's order in order to find out that the former Macedonian prime minister is not on the ground.

The Macedonian police issued a warrant for arrest on the account of the former Prime Minister of the country after an appropriate decision by the Skopje court yesterday afternoon.

In the beginning of October, Gruevski was sentenced to two years in prison for promoting an act of unlawfulness, in the case of a judicial district vehicle from the country where he was Prime Minister, 600,000 euros.

On Friday, the Skopje court rejected Gruevski's request to convict him, and politicians in the Skopje Institute had to attend to commence a conviction.

However, the former Macedonian prime minister did not appear in prisons, the efforts of the judiciary and police authorities to find him at his home address in order to give him a decision to appear in prisons was not effective.