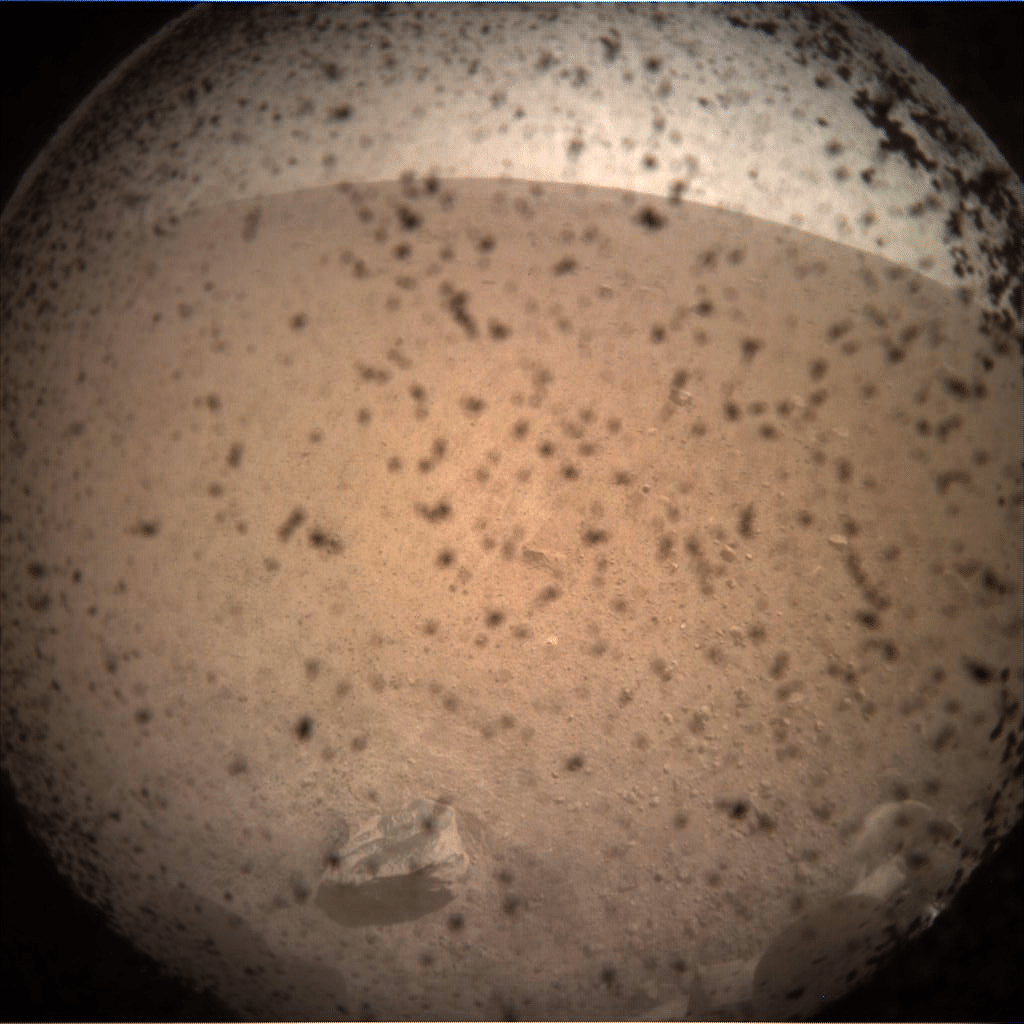 The NASA robot InSight landed on Mars successfully on Monday and sent first data back to Earth. At first, those responsible in the control center reached the predetermined signal, a short time later followed the first photo of the surface of the Red Planet. Due to its still and dried lens protection it shows the characteristic red surface of the planet, an extremely smooth environment and a stone right next to the probe. You and the signals were transmitted over two experimental satellites to Earth that brought InSight. The two Mars Cube One are the first CubeSat small-sized satellites that are used as far away.

The InSight launched in May is now in the plane Elysium Planitia north of the Mars equator. The NASA researchers dressed in dark red shirts burst into clapping, cheering, hugging and jerking when the confirmation arrived. After entering the atmosphere, the robot was braked with a brake rocket and a parachute in an extremely complicated maneuver of a speed of 19,800 kilometers per hour. The automatic landing took place for a total of six and a half minutes.

Jim Bridenstine, the head of the US Space Agency, was present during the maneuver in the control center. "It was so intense that you could feel the emotions," he explains and added "What a wonderful day for NASA." Only seconds after landing, he was congratulated by US Vice President Mike Pence. Whether InSight ("Interior Exploration Using Seismic Investigations, Geodesy and Heat Transport") is now also fully functioning, will emerge in the coming days.

The 360 ​​kilogram heavy robot can not roll, but remains in one place. The landing site is located in a region which is largely free and clear of larger stones and rocks. Previously, Mars missions did not explore the area yet.

With a number of scientific instruments, the robot will now investigate Mars and, above all, bring about the buildup of the planet and the dynamics under its surface. As soon as the lander is safe, in the immediate vicinity, the search for suitable locations for the used measuring instruments should begin. A robot arm should lift it to the optimum position.

A device developed in Germany should drill into the ground. The robot with the official name HP3 ("Heat Flow and Physical Properties Package") was developed by the German Aerospace Center (DLR). The 40 centimeter long, tapered device will penetrate up to five meters deep and measure the flow of heat. The total of around 650 million euros in InSight Mission is created for two years.

Lastly, NASA 2012 successfully launched Rover Curiosity on Mars. Landings on the Red Planet are extremely difficult – only about 40 percent of all launched Mars missiles have hitherto been successful in NASA. A landowner of the European space agency ESA has recently failed to land the landing.