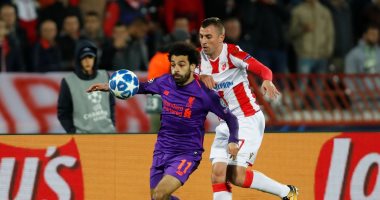 The English team of Liverpool, a professional team from the Egyptian Mohammed Salah, against the hosts of Red Star Serbia, two goals free of charge, in the first half of the match, currently in the stadium, "Red Star Stadium", in the fourth round of the third group in the Champions League.

Liverpool's stars, led by Mohamed Salah, Sturridge and Sadio Mani, failed to achieve in the first 45 minutes, while hosts and supporters managed to score a great goal and achieved two incredible goals in the Reds goal.

Milan Pavkov scored twice against Reds against Liverpool in the 22nd to 29th minutes.

Liverpool is at the top of Group C with 6 points, one in front of Italy's Napoli and two points for the third place in Paris Saint-Germain, while Red Star is fourth and final with one point..