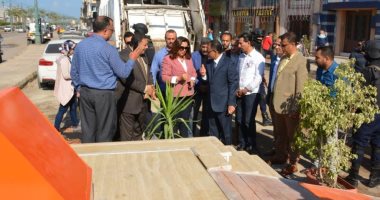 Dr. Manal Awad, governor of Damietta, reviewed the model of the landfill site, carried out by the local unit of the city center of Damietta and the town of Al Aasar. The idea behind this model is that there are many underground boxes.

Dr. Manal Awad praised this model, which will significantly change the cleanliness system, which will reduce the accumulation of garbage on the streets, which will help to improve the entire cleaning system and increase the appearance of civilization and beauty.

The Governor called for an immediate start to the study of the repetition of this model, especially at schools and hospitals, in order to preserve the health and safety of students and patients, and to emphasize the sponsorship of all positive ideas to address the problem of rubbish and pollution control.

On visits to the village, the governor visited the Ramadan Primary School 10th, where he monitored the progress of the educational process in the classroom and instructed the school director to educate students about the importance of rationalizing water consumption and not neglecting the cleanliness of the school.