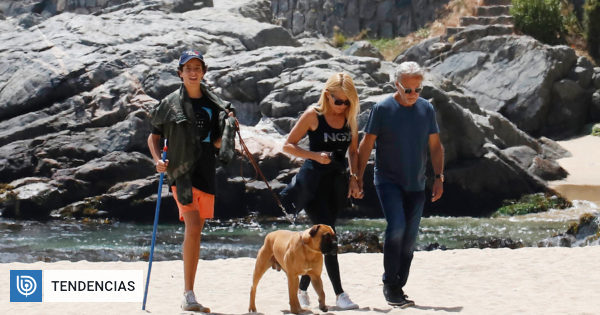 The brain tumor and subsequent surgery Máximo Menem Bolocco He kept all of Chile on alert, who followed step by step each of the details that emerged from the health of the 15-year-old adolescents.

Almost two weeks after leaving the Clinic Las Candes (after three days of recovery), the young man is resting with his mother Cecilia Bolocco and her partner, José Patricio Daire.

The family was caught walking with their dog relaxed by the coastal town of Zapallar.

On the occasion, Maximo worn orange shorts and a black shirt, while his mother wore black sportswear and white sneakers.

Recall that Maximo is hospital after presenting severe headaches and vomiting, which worries the doctors. After some examinations it was discovered that he had a brain tumor and he had to be operated in an emergency.

This intervention takes about eight hours and everything goes according to plan. Meanwhile doctors are waiting for the results of the biopsy.

After being discharged, Bolok thank the public for her and her son. "I want to thank everyone, the chains of prayer, because when I entered the Pavilion where Dr. Concha and his team, and Dr. Rivera, operated on him, I feel a lot of love, I felt that my son was protected "He peaked between tears.