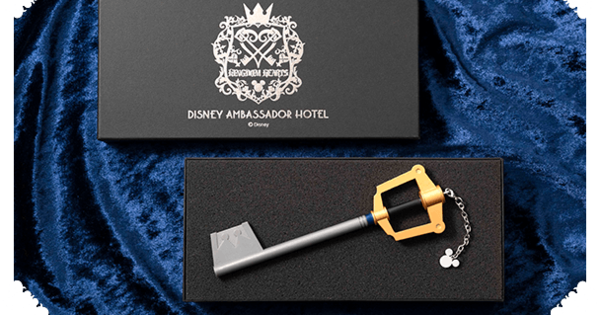 Tokyo Disneyland's Disney Ambassador Hotel has room that can only be unlocked by the biggest of Kingdom Hearts fans.

Guests will receive one-of-a-kind room key shaped like Sora's keyblade. Just like a normal hotel key, the keyblade will unlock doors with a wave of its owner's hand.

The room is decked out in Kingdom Hearts themed furniture and art. The room's beds display Sora and Riku on the headboards welcoming guests to a peaceful night's sleep.

The hotel will offer the special room for a limited time with the final day set June 30. details are still under wraps.

Square Enix's Kingdom Hearts III Game hits stores on January 25 in Japan for the PlayStation 4 and Xbox One, and on January 29 in the West.

Confirmed worlds include Big Hero 6, Toy Story, Tangled, Monsters, Inc., Pirates of the Caribbean, Frozen, and the returning Olympus Coliseum and Winnie-the-Pooh worlds. Square Enix will release postgame video content in the first few days after the game is released.