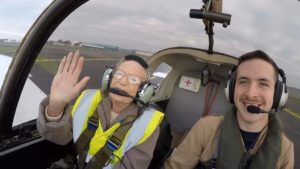 A high flying Grand Tested one item off her bucket list as she was wiping off into the sky for the very first time.

After suffering a perforated eardrum in her 20s, Elizabeth McCain, 81, was advised not to fly by her doctor.

And despite the hole in her earrings healing, Elizabeth, known to his family and family as Betty, was careful about the advice – and never even put feet in an airport for 60 years.

But when she had recently diagnosed with terminal lung cancer and told she had lived in between two and six months, Betty decided it was time to spread her wings.

Her son Andy helped her draw up a wish list of things she would like to do before her died and Betty stay the skies for a private flight.

However, during jeting to foreign climbs, grandmother-of-18 Betty took an air trip over Benslie, North Airshire – even saw her home from the sky.

Andy approached Prestwick Flying Club about his mother's dying wish, and Leo Levson Anderson took her for a spin in a Bulldog plane.

Brave Betty, who now also has tumors in her pancreas, neck and gullet, said: "I do not think that was as bad as I thought.

Son Andy said: "She loved it. Of course, it was her first and last.

She was over the moon, she just could not believe it.