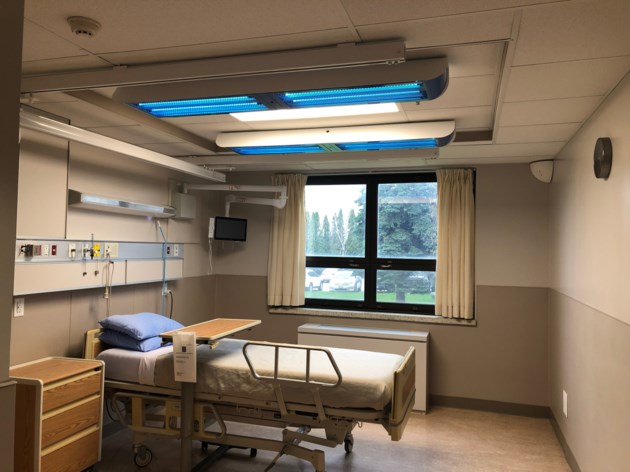 There are copper in them there walls.

Collingwood General and Marine Hospital (CGMH) has opened the first of five self-sanitizing rooms and will be the first hospital in Canada to use copper-infused panels in its hallways and patient rooms to prevent bacteria growth.

Located on the medical floor, over-patented, it is packed with the latest technology in sanitizing the ceiling lights on the copper-infused toilet seat.

Norah Holder, CGMH president and CEO, has Collingwood's hospital is the first in Canada to combine the self-sanitizing elements into one patient's room and bathroom.

The bacteria-fighting technology includes copper-infused high touch surfaces like the bed rail, door handles and pulls, the toilet seat, and the toilet handle.

There is light on the ceiling that runs on a disinfecting cycle when the patient is in the bathroom or outside the room, and there are plastic panels on the bottom half of the wall coated with titanium dioxide, which reacts with UV light to kill bacteria. .

The no-touch sink is engineered to prevent splashing and deliver ozonated water. Ozone has been shown to have an oxidizing, antiseptic and germicidal effect. More where lighting in the bathroom activates after each use, bathing the room in UV light, which destroys the cell wall of spores, spores and fungus.

The next room completed will have copper-infused panels covering the bottom half of the walls.

According to John Vidis, manager of operations and maintenance at CGM, Collingwood will be the first hospital to use the panels as they are new to the market.

He said the technology does not remove the need for cleaning, but it mitigates the burden on the bacteria in the room. Rooms will still be cleaned once every 24 hours at minimum.

"This technology is really going to provide benefits in terms of patient safety and safety of staff and visitors," said Lisa. "I can have faith in such technology to provide the best level of care for our patients. This will help improve outcomes and get patients safely to their families."

CGM has already tested some of the technology in its emergency department.

Widdis said he wanted to start the washroom in the section once he watched the constant running of people using the facility. The bathroom was cleaned once every 1.5 hours, but between eight or so people would use it.

When the emergency room was renovated in 2016, Vidis had an ozone sink and some other self-sanitizing technology installed in the bathroom. Staff sinks are also replaced with models that delivered Ozone water.

Since then, the hospital has seen the lowest rates of C-deficient events in recent history.

With these rates being the lowest they've been in six years. Widdis said the rates are down almost as soon as the emergency department changes.

"[Infection control] "It's a very significant component," said Lisa. "There is something all hospitals are struggling with … C-deficient can live in old age and those whose immune systems are not strong enough."

Widdis has been in CGMH for 29 years and he saw hospitals and researcher operate to battle hospital customer infection rates over the course of his career.

In the beginning, said vidis, it was done with chemicals, later bleaching and hydrogen peroxide on surfaces. Prior to flood lights, copper infused materials, and ozone water sinks, the latest innovation was a "bomb" that would vaporize hydrogen peroxide.

"We still use some of them," said Vidis, adding these chemicals have moved to more earth-friendly compounds. "These are just more weapons we use in our fight against hospital customer infections."

The technology now installed on the medical floor will continue to work against mutilating bacteria.

Widdis said staff decided to start installing the technology on the medical floor because it was where patients would be isolated in cases of infection.

"If we have an outbreak that we don't have for years, this is the floor where we run into the most trouble," Vidis said.

Work is continuing to explore four more purifier rooms and renovate hallways to include fresh paint and copper-infused panels on the walls. There are also plans for the work of any hospital in the bathroom with copper-infused toilet seats, high-touch areas, ozone sinks and UV light.

For rooms not equipped with UV lights, the hospital has two portable towers with lights that can be used for disinfection.

Holder is looking forward to building this new and even new self-sanitizing technology in the future.

The CGMH Foundation has set up $ 1 million for the project of the Tree of Life campaign, held at Christmas and other initiatives.