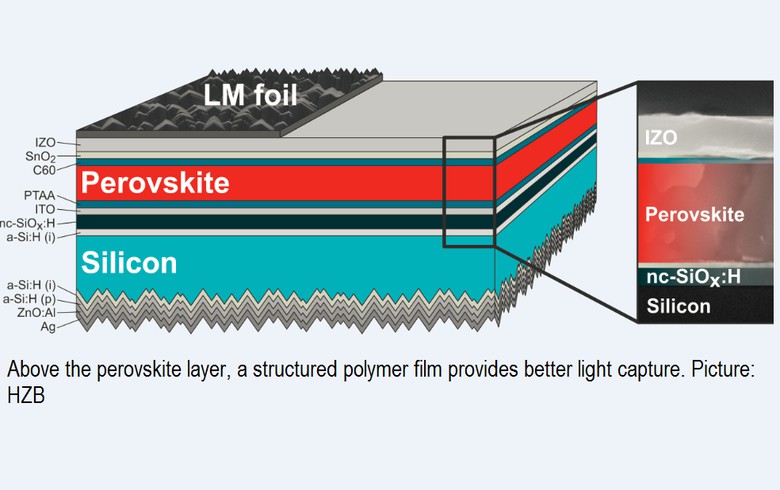 Dealing with reflection that limits the conversion of energy into a cell is one of the challenges for tandem solar cells made from silicon and metallic halide perovskite compounds. Using nanostructures such as pyramid microfacies embedded in silicon, reflection can be significantly reduced. However, the microscopic roughness on the surface of silicon resulting from this method could prevent the depositing of a very thin perovsk layer.

The HZB team, run by physicist Steve Albrecht, has explored an alternative approach to light texture management in tandem solar photovoltaic (PV) cells. The silicone layer was compacted on the back of its cell and the perovskite layer can be applied by spin coating on the smooth front of silicon. Then, a polymer control film (LM) was attached to the front of the device. Thus, the team could still get a high-quality perovskite film on a flat surface, while benefiting from the front.

Marko Jošt, the first author of the study, and colleagues developed a sophisticated numerical model for complex 3D functions and their interaction with light. This allows you to calculate how different texture devices on different interfaces affect performance.

"Based on these complex simulations and empirical data, we believe that it is realistic to achieve 32.5% efficiency – if we succeed in integrating high quality perovskite with bandwidth of 1.66 eV", emphasized Jošt.

Simulations performed by the team show that LM on the front side is perfectly done with diffused light irradiation, which means that tandem PV foils with foil can match the integrated integrated photovoltaic (BIPV) applications.