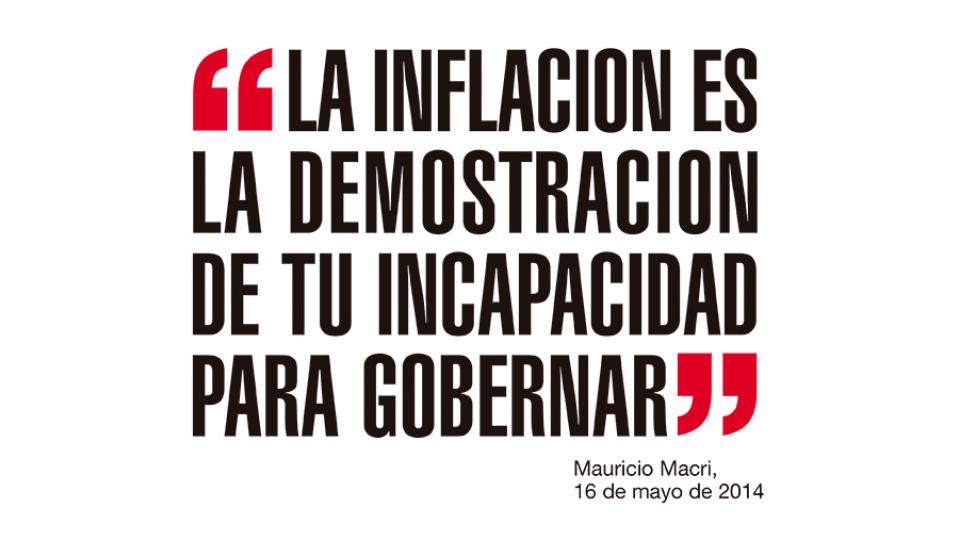 National level inflation was 2.6 percent in December, reaching 47.6 percent in twelve months, the highest record in 27 years. 2018 is the year with the highest inflation if the entire convertibility period was taken into account – without the year of its inception, the Alliance period, the 2001 crisis and the three Chancellors' government. This achievement of the comeback government is not an act of magic, but was woven in previous years based on an increasingly deliberate deterioration of the external situation that was finalized last April, accompanied by high prices and lack of control of the part of The state of sensitive prices for the pockets. Inflation has caused a general deterioration of living conditions and is also decisive in terms of the political scenario against the ruling party and the collapse of the national economy.

Although inflation moderated in November and December compared to previous explosive months, it remains very high (see in particular) and the BCRA reported that "because monetary policy acts with lugs, corrections to regulate prices and excellent wage agreements, monthly inflation is expected to be Will remain at the levels in the coming months. "That is, the monetary authority recognizes that inflation will at least cause the entire summer to show greater moderation, and will be the consequence of deepening. Recession.

One of the peculiarities of the Argentine economy is that food is the basis of exports. The dollar is an impact on the internal formation of prices because flour mills, rice production, refrigerators, oil meals or dairy farms do not have to sell cheaper in the domestic market than in the foreign market.

Last year it started with a dollar of 18.95 pesos and ended at 38.83 pesos, an end-to-end progress of 105 percent. And the national government is pursuing inflationary tensions, with the support for the removal of subsidies for public services, which directly increases the price. Housing, water and electricity rose last year by 45.7. But in addition, the percentage increases are being used by the Government on values ​​not in 2015, which led the ballots to become vulnerable in the family budget.

Transportation increased by 66.8 percent of the nation's population due to the joint removal of subsidies on buses, trains and subways along with the rise of naphtha. At the beginning of 2018, the team that currently quotes 17 pesos in the metropolitan area is 6.50 pesos. A year ago, the Super Nafta liter at the IPF stations was trading at 22.6 pesos and currently stands at 37 pesos up 64 percent.

The health sector has passed a 50% increase in the cost of medicines and the rise in the price of drugs. Many remedies are also linked to the cost of the US. There. Currency, while prepaid fees exceeded 40.8% over the past year. The household equipment and maintenance chapter rose by 50 percent, also driven by the dollar, which affects major metallurgical inputs and imported variants. Clothing and footwear rose 33.1 percent; Communication, 55.3 percent and recreation and culture, 43.4.

More important than the nominal variation in prices is the deterioration in real-life income, that is, as salaries, pensions and family allowances are related to prices. The minimum retirement rate at 7246 pesos is beginning in 2018 and now stands at 9300 pesos, up to 28.3%, as well as the increase in the Universal Children's Lease (AH), which ranged from 1412 pesos per child to the current 1816 pesos. The retirees are heavily influenced by inflation, but holders of the ahh receive compensatory bonuses for the loss of purchasing power, although they are starting this year with reduced income before the current level of prices.

According to the Ministry of Labor, the average real salary of the private sector registered until October 2018 was 10.9%. In worse position, unregistered workers, which amount to 1/3 of the workers and much worse, are unemployed.