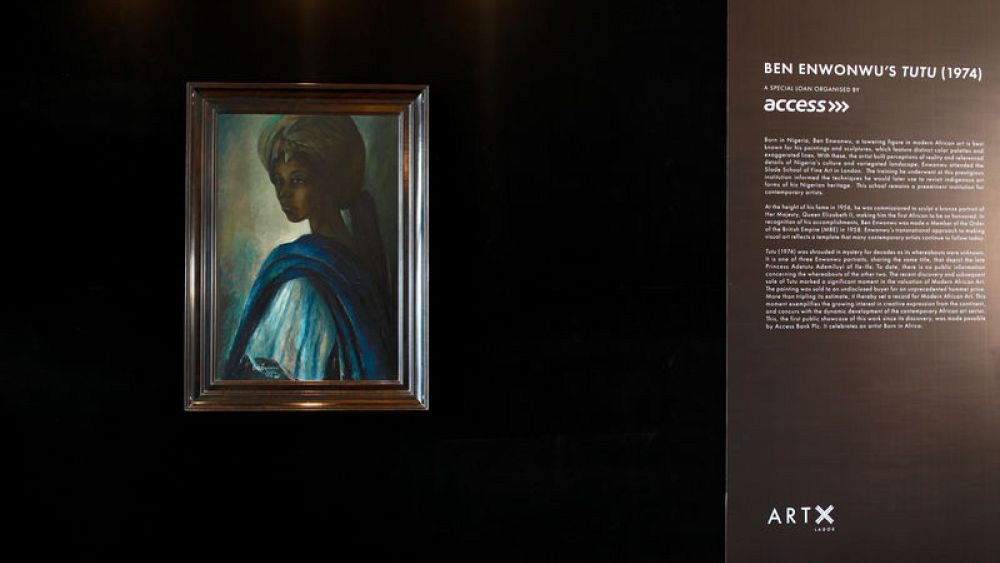 With Sean Sanni and Angelo Ukomadu

LIGOS (Reuters) – Nigeria's Mona Lisa, a picture that has been lost for over 40 years and found in London's apartment in February, is being exhibited in Nigeria for the first time since its disappearance.

"Tutu", the work of the most famous contemporary artist of Nigeria, Ben Enwonwu, was filmed in 1974. It was created at an art show in Lagos the following year, but it was his unknown city until it reappeared in the north of London.

Owners – who wanted to remain anonymous – called Giles Peppiatta, an expert in modern and contemporary African art at the London auction house Bonhams, to recognize their image. He recognized Enwonwu's portrait.

"It was open to itself by a very routine evaluation call to look at the work of Ben Enwonwu," said Giles Peppiatt, director of contemporary African art in Bonhams. "I did not know what to see. I opened up, and that was an incredible picture. We did not have any hiding" Tutu "was there.

As there was still a little secret there, Peppiatt said.

"The whole family that owned it was that they owned their father who had business interests in Nigeria. He was traveling and picking him up in the late or mid-seventies."

The family set up a portrait for sale, and in February it sold 1.2 million pounds ($ 1.57 million) to an anonymous buyer. Sales have become the most appreciated works of Nigerian contemporary art sold at an auction.

"Tutu" was lent to Art X Lagos, which was held from Friday to Sunday in Access Bank, the organizers said in a statement. Peppiatt said Access had arranged a loan but did not own the painting.

"Tutu" is called the African "Mona Lisa" because of this disappearance and re-emergence, and this is the first work of a modern Nigerian artist who sells more than a million pounds, "says Tokini Peterside, art founder of the Post.

The original Mona Lisa, the masterpiece of Leonardo da Vinci, was stolen from Louvre in 1911. Eventually, Dad, Vincenzo Peruggia, drove to Italy, where he was rebuilt, and returned to Louvre in 1914.

Nigerian painting is a portrait of Adhetut Ademiluyi, the daughter of a traditional ruler of the Yoruba ethnic group. In Nigeria, it has special significance as a symbol of the national reconciliation after the Biafran 1967/70 war.

Enwonwu belonged to the ethnic group Igbo, the largest in the southeastern region of Nigeria, which attempted to separate itself under the name Biafra. Yoruba, whose homeland is in the southwest, was mostly on the opposite side of the war.

Enwonwu painted three versions of the portrait. One is in a private collection in Lagos, while Peppiatt hunts third in Washington, D.C., said an expert. Prints, first produced in the 1970s, have been in circulation since then, and images are known to many Nigerians. Enwonwu died in 1994.